We were lucky to meet Nick Thompson, founder of Halfpipe London and HUB Custom Bikes when we did as we were preparing for our TLD team ski trip with Snowbizz in Puy St Vincent!

He kindly donated to us some of the best quality equipment and clothing such as base layers (thermals) and gloves, which are equally important when skiing or snowboarding – because of the snow and the cold.

JP also bought a new jacket, riding hoody and trousers made by Nike. These were perfect and we are very thankful for his helping hand as it helped our trip be successful – he saved us time, stress and, most importantly, he kept us warm!
Now that TLD is on the skiing side of the ski/snowboard fence, we wanted to show the world how mature we are, and feature Nick – even though he is a “rider” (yes we learned the lingo from you, Nick!)

Enjoy the interview below – questions by TLD, answers by Nick!

As founder of Halfpipe London, which sells snowboard and skateboard gear online and in a shop on Golborn Road, when asked what do you do, how do you usually describe it?

We have a pretty unique history. My grandfather owns the business. However, he used to own it as a Fish and Chip shop for around 30 years. He was originally going to close it and rent it out, as he has one on Portobello Road which is pretty famous and a lot busier. Fortunately, my uncle, who snowboarded at the time had a bit of mid life crisis, further talking my grandfather into opening it up as an extreme sports shop and the natural progression was cycles and repairs. I started working here 10 years ago and i’m still here now!  I head up the majority of the buying for the snow department and handle all the “creative” side of the business; the website, graphics and social sites. So when asked what I do I guess I say I run my own snowboard shop!

How long has Halfpipe London been about? Do you have a large staff base?

We opened late 2003 and we have 4 full time staff and an extra 2 part time (but they usually hang around in the shop when they’re not working anyway). 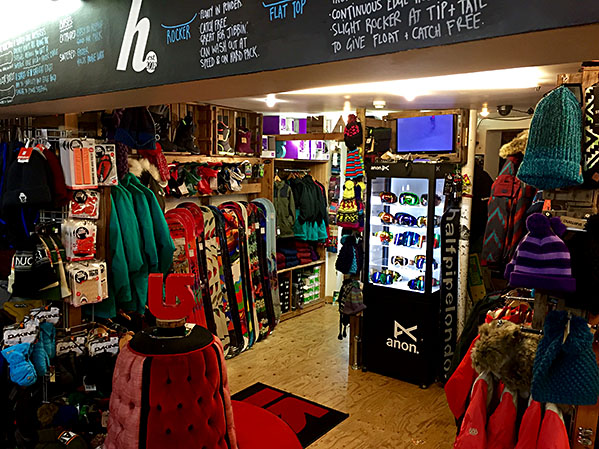 How often do you go snowboarding – Where are your favourite places?

It’s funny, the more you’re in the industry, the less time you have to go and ride! January and Febuary are our busiest times as we’re concentrating on pre-orders for the next season so if we get away to ride 2 or 3 times we’re lucky. Switzerland is amazing terrain, but I’ve been to Bulgaria a few times, I’ve always had a great time there…and you definitely can’t argue with the price!

Do you also ski?

I can! I actually learnt when I was 12 but started snowboarding when I was 13 and never touched skis again!

Do you have many skiing customers or is it mostly snowboarding?

The majority of our customers are snowboarders but we have some keen skiers too. They tend to prefer snowboarding clothing to ski and generally like our selection. Plus some items are good carry overs so can be bought for either of the two, such as goggles, hats and helmets.

How long ago did you begin – and what was the first year of business like?

We set up in 2003 and to be honest, it was surprisingly, a pretty good start! Back then, online shopping wasn’t that big in our industry; there was no comparing prices, reading ill-informed reviews, no second hand online market, so if you wanted snowboard gear or bike kit, you had to go to a store and speak to someone. We also sell skateboards and skateboarding went into a boom in 2003-5 as it became “cool again”. Business was good back then, it wasn’t amazing, but it was simpler and easier to handle. Now, it’s 2015 and we have to compete on so many different platforms, a smaller shop like us sometimes doesn’t have the capital to advertise in mags or online so we have to rely on social media to build a presence and of course our wonderful customer service and knowledge of the product. But we have found that people would rather deal with an independent company, over a chain store as they feel they get a personal service and a better choice of product. 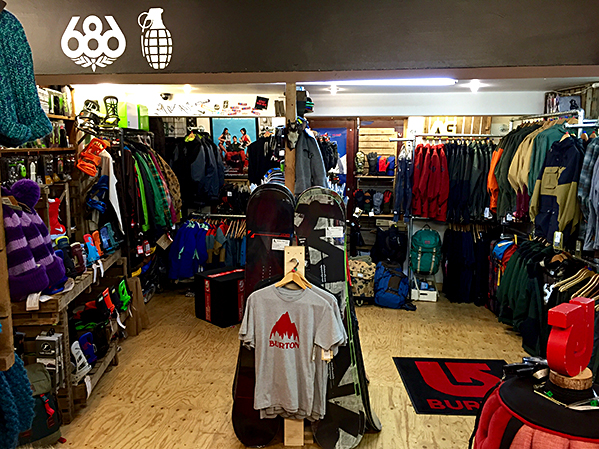 In conjunction with the physical shop, when did you start selling online?

I started working for the shop from the first day it opened and I’m a little younger than my uncle, so its safe to say, I was more in touch with current trends and I was pretty quick in suggesting getting a website built.

How many e-commerce websites have you had, just the one – or is this the 2nd/3rd iteration?

Well, we started with a really poor website. We’ll call it Mark 1. Mark 2 came shortly after as the first one wasn’t really built for selling. The new one had product and you could place orders but you couldn’t actually buy the item through it. You would place the order, then we would call you to confirm the item was in stock and take payment over the phone. We realised that most people do their shopping in the evening and it was sometimes impulsive so we would lose a lit of custom. We now have an e-commerce site and we’re on our 3rd version of it as we like to keep the layout fresh for repeat customers.

How often do you update your site with special offers and with new products?

I’m constantly updating products on the site, whilst making sure banners are rotated. Keeping the blog section updated is super important as well…but you’d know all about that!

What percentage of your time is spent managing the online version of the site vs the store version?

My desk is behind the counter on the shop floor so you could say I have both feet firmly placed in both worlds! I’m constantly juggling the two!

Looking back what would you do differently now that you have learned over the years what to do?

I’d probably hit the online market earlier and get an ePos set up in store, as we were a little late doing that and getting all the product in is a big task! Oh and I’d buy the domain halfpipe.com – haha!

So overall, a big thank you to Nick at Halfpipe London, for his kind gesture and for providing us with the best skiing gear fit for purpose!