Editor’s Note (from Keren) This Poképost was written by James Ross – he has just done a week’s internship, and I set him the project of going out and experiencing Pokémon Go in Soho! Over to James:

So, if you have been living under a rock lately and don’t know why everyone has actually started going outside, then you don’t know about the latest craze; Pokémon Go!
Hello! my name is James and I’m an intern at Top Left Design, my week here has been so interesting and fun. 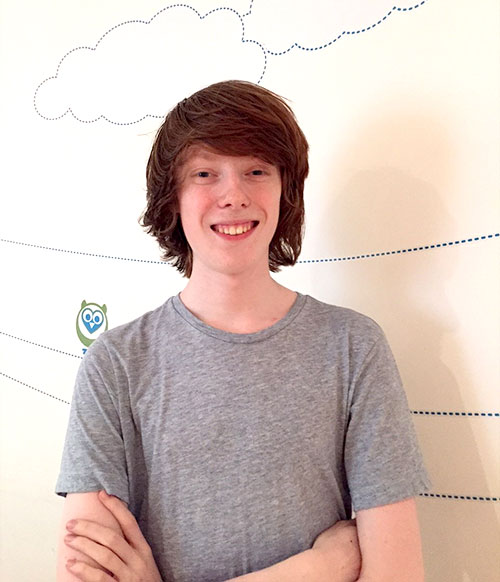 During my work time here I have learnt so many things and picked up so many skills.
My lunch break however is just as fun now with the latest and hottest smartphone game yet. This smartphone game is the most played game in U.S. history as well as the breaker of stock market records, and is all the craze in the U.K. Especially since its release on the 14th of July. Soho in particular has been extremely lively lately with crowds  gathering in Soho Square yesterday. 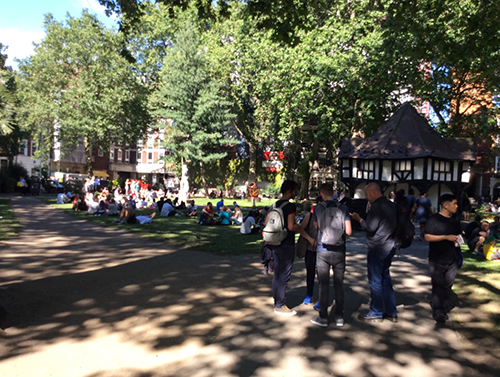 (Pokemon Go in Soho – a gathering of people playing Pokemon Go in Soho Square gardens)
One of the reasons for this is that Soho has an abundance of Pokéstops and Pokémon Gyms, these are places to stock up on digital items and to battle other players’ Pokémon. Since this App is what every person on their lunchbreak is playing right now in Soho (including myself at TLD!), I think that it would be nice to show you, dear reader, the most popular places and hot-spots.

5 things you should know

I personally am level 7 and my team is Team Mystic. Keren – my boss- went with Team Valor, which was a bit awkward since it’s known that these two teams are sworn enemies… 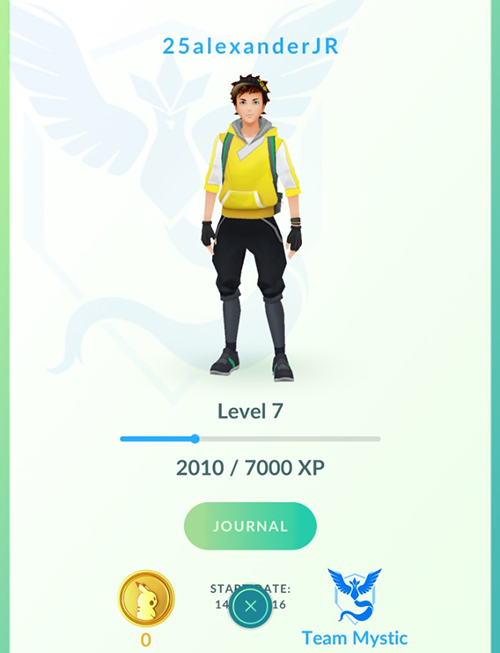 (Pokemon Go in Soho – My middle name is Alexander and JR is my initials, James Ross. 25 is my birthday: 25th of May. This is my avatar profile.)
Soho really is the best place to be. There are so many notable areas in such a small space. This area in the game is buzzing! Since our offices are close to Old Compton St, we can access a Pokéstop from here. Also Soho Square Gardens is not far from here, a popular spot for people who are playing the game to meet up and hang around due to the plethora of Poké-stops.
Today I went on my lunch break to start my own adventure of touring around Soho to visit the more interesting Pokéstops, I went to Pret a Manger for lunch (food is so good there). 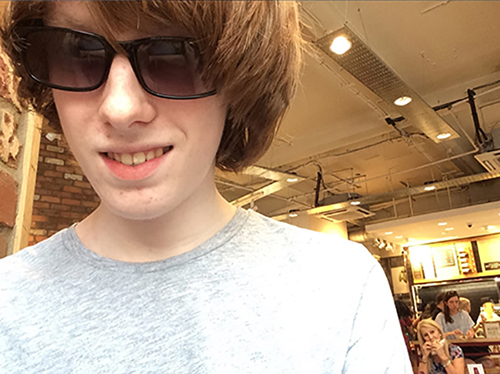 (Pokemon Go in Soho – James out for lunch at the start of his Pokemon outing)
On my way there, I stopped in the Soho Square gardens, I was sitting on a bench where I was ambushed! Only by a Drowzee though (a Pokémon), but at least I caught it! This was due to the lure placed on the Pokéstops in the Square. 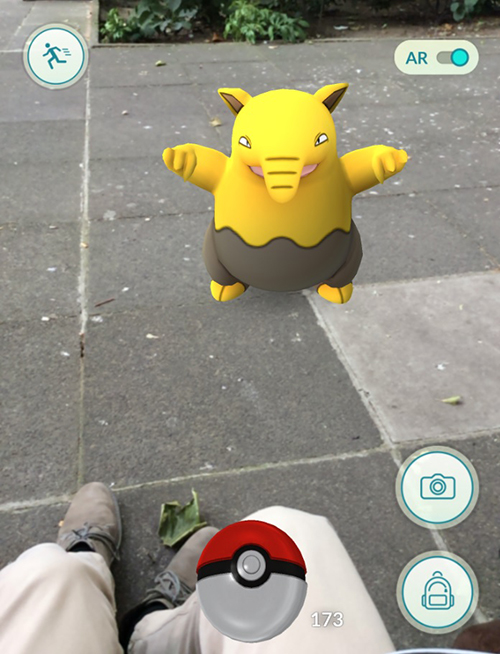 (Pokemon Go in Soho – James is attempting to catch this Pokemon: Drowzee)

Lures are things which can be placed on a Pokéstop to lure Pokémon to that location, and since people want to catch Pokémon, there are always a lot of people playing Pokémon Go around these places. 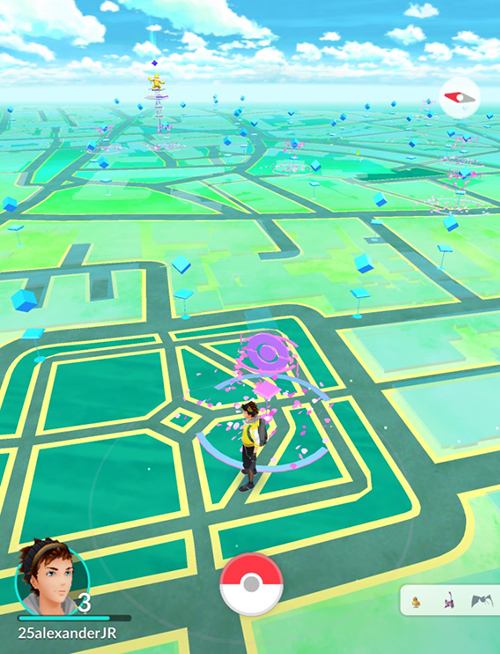 (Pokemon go in Soho – James’ Avatar next to a Pokestop with a Lure)
Anyway, after that little event, I stopped by the first notable Pokéstop. This was the Gosh! Comic Book Store. It was great hanging out there since there was a small market right opposite the store so it had a great and lively atmosphere. The store looked cool as well with all of the comics on display. You don’t get to see many comic book stores in London so this was a real treat! 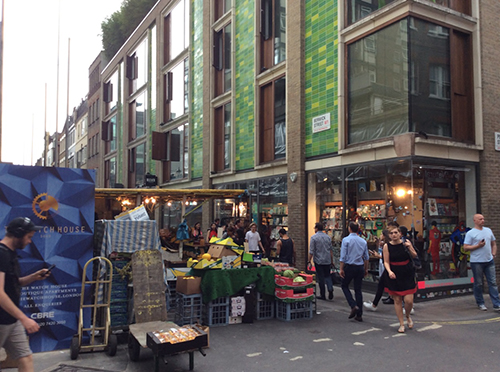 But what was even more impressive was the Soho mural which was the last Pokéstop that I had visited. It was a bit hard for me to find at first because I haven’t had been to that area before, I accidentally stumbled into the atrium called “Kingly Court”. After I had found my way again I saw the colossal mural. It was so huge and colourful, I liked it so much! No wonder it’s an iconic landmark for Soho. 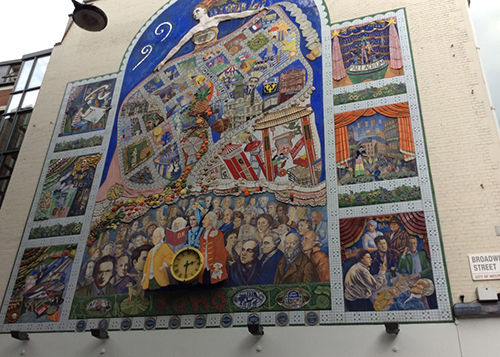 (Pokemon Go in Soho – the Soho Mural was the last stop but was the most impressive)
My journey through Soho was so exciting, and I hope that yours will be just as awesome! Let’s go through some of the best places in Soho, to help you along.

Nearby gyms – and what you need to know 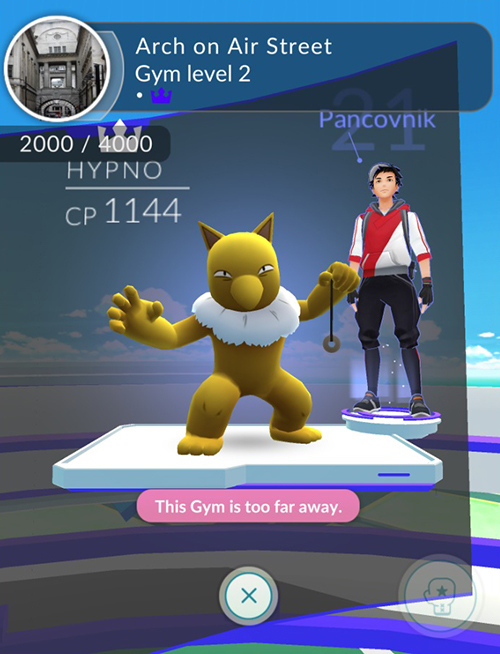 (Pokemon Go in Soho – what a gym looks like on the game… controlled by Team Mystic)
If you win then your avatar is shown to indicate that you have caught the gym for your team. Taking control of gyms is also a great way to get in-game money for virtual items.
Now that I have guided you about playing Pokémon Go in Soho, you should be able to have tons of fun in Soho while visiting us at TLD. Enjoy! 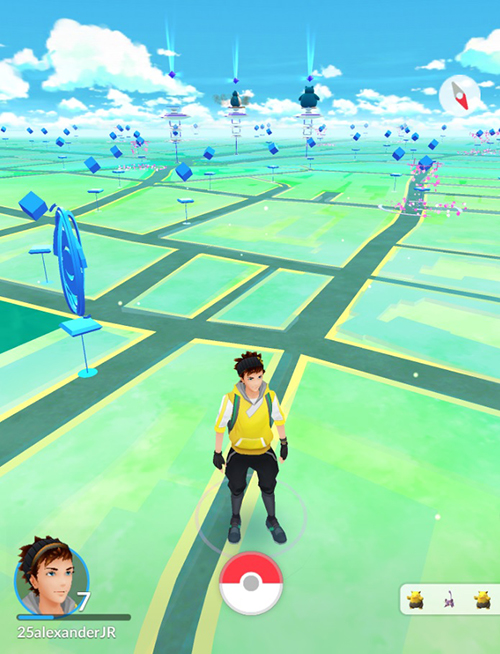 (Pokemon Go in Soho – GO TEAM MYSTIC, we control all of the Pokemon Gyms in Soho now!)