I just got back from an unbelievable trip to New York. It’s not my first trip, and I was there for several reasons (my dad was there at the same time, and it was his birthday, so there was family time).

But the real reason I went there is for work – but of course!

We are doing a website for a film called Hercules – the Legend Begins. The website is in its final stages of approval and I will be sure to blog about it when it’s launched. It’s a really exciting project!

And in addition to that, I am running the official Twitter and Facebook channels for the movie.
I heard that the production company, Millennium Films (my dad is chairman and founder) was going to be organising a trip to Comic Con for autograph signing, a Q+A panel and the exclusive first view of the official trailer. I quickly told Jonathan Yunger (“Yoni”), who is our main point of contact and a co-producer of the film, that I would be willing to attend Comic Con and do live tweeting (in case you missed it, I wrote this blog about live tweeting at an event). Director Renny Harlin, co producer Jonathan Yunger, and 4 of the stars of the movie (Kellan Lutz, Gaia Weiss, Liam Mcintyre and Scott Adkins) were also there, meeting fans and participating in the panel discussion.
And JP (our Technical Director at TLD, and the coder working on the website for the film) very kindly agreed to come along. It’s been a dream of his to visit Comic Con and he was so excited. He helped with taking pictures and running around to make sure we got extra coverage!

We went arrived in New York on Friday night, went for dinner with the cast and we all started preparing the logistics.
Then the next afternoon, off we went to the venue – the Javits Center New York – for Comic Con (the above picture shows how happy we were when we got to the Javits Centre), and followed the cast around the event, as they did autograph signing, an interview for FeedPop, signing shields of armor and swords which were to be given away are prizes at the panel, and then finally to the panel.

Highlights from the event:

For a feel of what it was like, see below:

You asked for more – here’s a pic of @TheScottAdkins and @gaiaweiss_ psyching up for the big day tomorrow! pic.twitter.com/P4YxxJnY0a 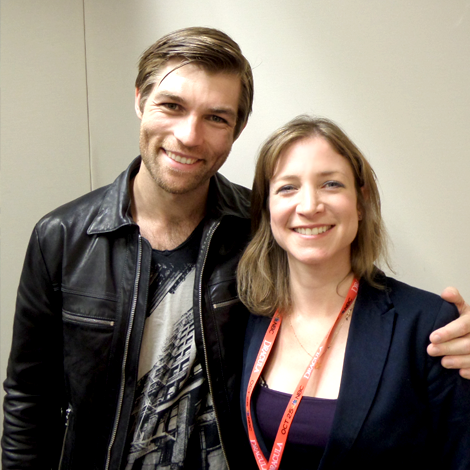 Video from the panel (courtesy of Gragon Productions)

The teaser – and the trailer

Kellan Lutz, who plays Hercules, is currently shooting the Expendables 3 (also in Bulgaria). But he took a break from filming to introduce this teaser a few days before Comic Con.

And this is the AWESOME trailer itself, which first debuted at Comic Con.