I love Twitter for its openness and potential and all the crazy and wonderful stories of people connecting on Twitter. And of life experiences that happen because of Twitter. And of course the speed of information sharing and opinion/sentiment airing. But there are often concerns about people using it for evil purposes, like abuse and spam.
And recently they have launched an informaiton portal called the “Twitter’s Safety Center”.

Since Twitter doesn’t censor user content, this brings a lot of clarity which will help to protect community minded digital citizens like me and (hopefully) you!

This is the one time I say “don’t engage!”

Though usually I would say “talk to people on Twitter lots” in the case where poeple are being abusive, then you have three choices.

The options are mute, block, and report. These are explained in detail on the Safety Center,

They never say ARGUE. So if someone is saying mean things to you on any channel, the best thing to do is one of the above, and NOT to get into any sort of public argument with them.

Read the rules. (Reported people breaking these get their accounts shut. ) 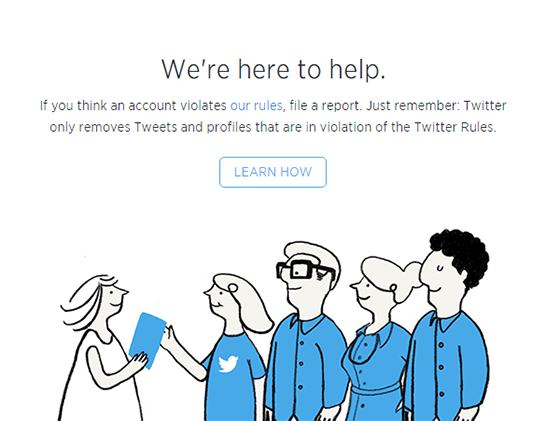 They will enlighten you and you will find that often the things that constitute “annoying” are against the rules. And if you show Twitter someone is breaking the rules then you can get their profile and tweets removed.
I was reassured to see these included:

Twitter has admitted in the past”“We suck at dealing with abuse and trolls on the platform and we’ve sucked at it for years.” At least they did something about it – the Safety Centre has been setup to simplify things and make things clearer. I’m a fan!