I turn the key into the lock until it’s bolted, slip it into my pocket, and walk away from the door towards the street. The sky is the same hue as the asphalt of the deserted street, like I am walking on a frozen lake reflecting the stormy clouds. As I approach the Tube station, there are more and more people occupying the wet pavement. Some touches of colour show up from the wildest clothes of the magnifying crowd, gradually making the ubiquitous grey of the urban landscape recede into the background. Soon, I reach the station. I notice a great ad across the street offering a journey to Paris, which is described as the “European capital of romance and culture”. I smile – pretty proud – and nod to myself. 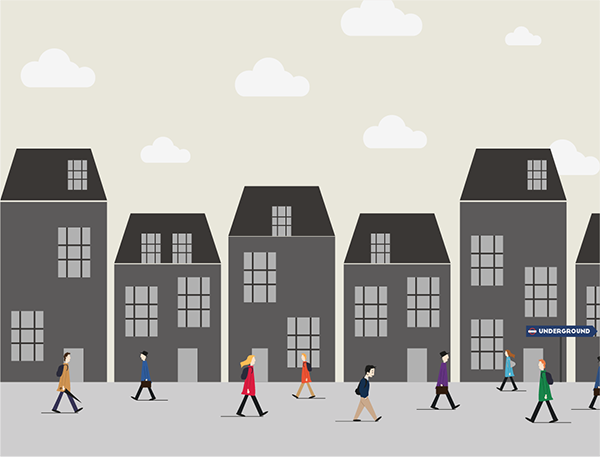 Just before entering the station, I pass the inexhaustible pile of free broadsheets.
At the beginning, I didn’t understand why the newspapers were sold at a loss, and even, in this case, given for free. Where is the profit? Then I came to understand that the profit basically comes from the ads; the price of the advertising space is set according to the supposed number of people that will take a copy. Because these are free broadsheet, lots of people take it, so the price for ads is particularly high. The magazines choose to offer it for free in order to earn more money from the ads.
Moreover, it’s good for their image to do that; it looks like they want people to be aware of what happens in the world, to exercise their right to information and opinion. This is why it says “Help yourself” on the container. 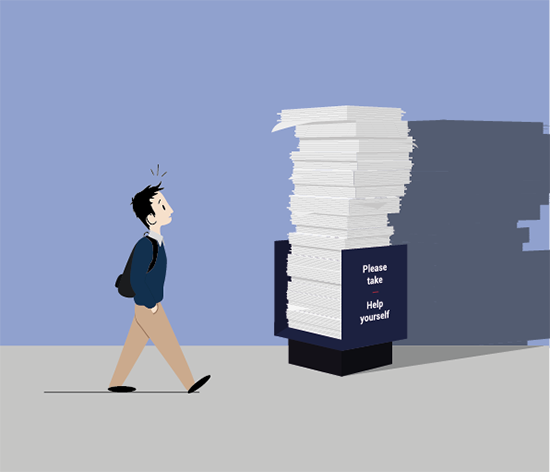 There is always bigger

I step out the escalator and enter the great tiled corridor, covered with an incredible number of ads – for theatre plays, food, awareness, clothes… everything is entitled! The thing that I find unbelievable with those ads, is that there is always a bigger one. You can find little ads, medium ads, big ads, bigger ads, even bigger ads, and then even bigger ads… The only limit is the size of the wall. 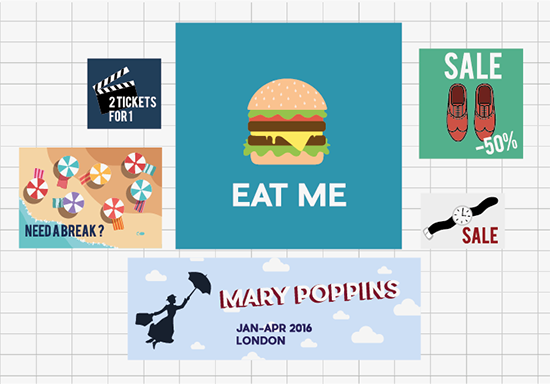 A lot of people are waiting for the train on the packed platform. Happily, there are even more people who get down from it, letting place enough for everyone – even some seats! As the doors are closing, a tuneful woman’s voice says “Please note that this train will not stop at the next station”. The train smoothly starts and moves forward for some minutes. But soon, it begins slowing down, and the darkness of the tunnel turns into a pale light. We have reached the ghost station.
This place looks just like the setting of a horror movie; the dilapidated and worn tiled walls, formerly white, covered with scraps of outdated ads, lit by the unsettled and faint light of the dying neon lightings, give a disturbing and fascinating aura to the place. I am getting used to this station by seeing it every morning, but today, something is different… There is a man. A masked man, standing up in a murky corner of the station. It’s pretty scary – or at least unexpected. He was just a technician though, but in this atmosphere, a rabbit would look scary!
Even the train itself seems to be afraid of the place; when it was approaching the station, it slowed down, like if it was on the lookout, and when it passes it, it suddenly speeds up, like if it was running away from some mysterious danger!! 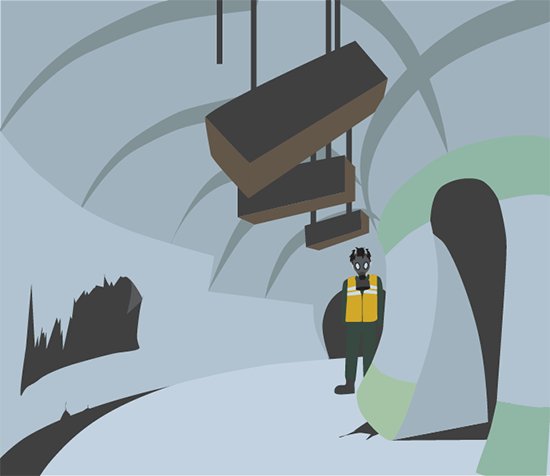 Finally, I leave the Tube, and the Oxford Circus Underground Station. Here am I, in Soho, the frenzied nerve centre of London.
When I arrived, some weeks ago, for the beginning of my work placement, it was right here that I saw for the first time the sky of London – I went straight from St Pancras to Oxford Circus in the Tube. This was like diving head first into the awesome British atmosphere – which I was so eager to find back after my two one-week stays in England a few years ago. This was here that I realized that I was indeed in London – indisputably.
This place looks like a huge human ant-hill, and I know that this evening, it will be even worse. So many people, walking away – who knows where? Each one looks alike, though, when you look at them closer, you notice that everyone is actually unique; some people are phoning while others are texting.  Some people are wearing simple t-shirt while others are hiding their features behind huge scarfs. Some people are talking English while others are chatting in French, Chinese, Indian, Spanish, Russian, and a lot of others languages I didn’t recognized. You can see fuchsia woolly hats, thick olive scarfs, long canary jackets, carrot figure-hugging trousers, cyan not-very-sexy socks, mint high heel shoes. You can see people carrying bags, suitcase, clothes, computers, pushchairs, mattresses, pieces of furniture, corpses – I hope I’ll never see the latter for real! 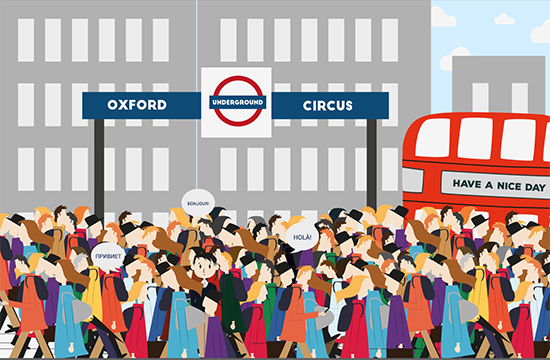 I quietly walk on the pavement, when I reach a crossroads… Glance at left. Nobody. First step on the road. Hoot from the right. A car just braked to avoid crushing me!
This is one of the things – along with the English keyboard – I’ve had the most difficulty getting used to: the flow direction. It’s so unnatural when you see cars go in one direction for 19 years, and suddenly, in the other one… (After one month, I still look the wrong direction of the road each single time I’m about to cross the street!! Seriously, I try to care, I don’t want to get crushed, but I just don’t think about it most of the time!) 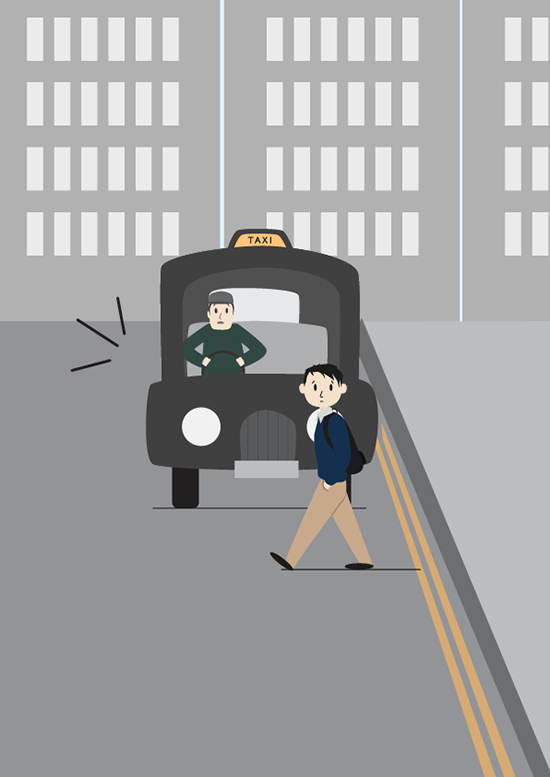 I am almost arrived at the office when, while turning at the corner of Dean Street and Bourchier Street, I see a team of window cleaners… Some may say that there is nothing incredible here. They are wrong! It’s actually pretty impressive; they are washing the third floor windows. They have added huge sticks to lengthen their squeegee. At least 6 or 7 meters. It looks so heavy and exhausting! And there are so many windows! And one of the guys is so puny! I don’t know how it’s even possible for him to carry the squeegee at arm’s length like that – I could not have. And it’s ‘only’ the third floor. I wonder if they do the fifth one that way…. 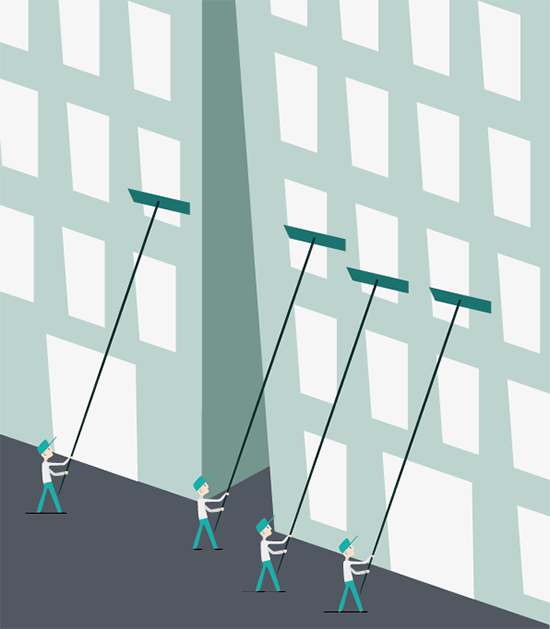 I press the buzzer number 1 next to the large glass door, and I wait thinking about my full-of-surprises journey to work. The door get unbolted, I push it, and repeat the process for the second door. A great smile welcomes me. “Morning!” 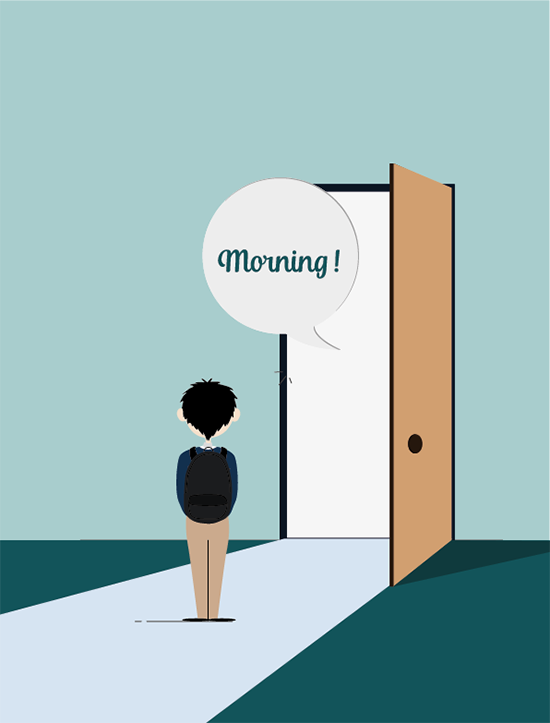