We at TLD love to go away on trips together and we’ve just returned from the UdayaLive Yoga Retreat!
In the last 3 years alone we’ve been:

My brother and how this is all connected

My brother Yariv is the owner of a company called Udaya Entertainment, which does cinematic yoga programmes and online yoga. You can subscribe to www.udaya.com and have access to yoga from the world’s top teachers. The site is regularly updated with new classes and you can sort by length of class, level, type of yoga and even music. It’s an amazing service and the yoga is top quality.
These classes are filmed at NuBoyana Film Studios, which is in Bulgaria (see the website we did for them here). These studios are owned by my dad’s company NuImage/Millennium Films – recently rebranded to Millennium Media. In fact, we just relaunched the Millennium Media website – see www.millennium-media.net.

The festival is put on by my brother Yariv and his team at Udaya (Udaya Entertainment is made up of Patty, Anita, Cody and Yariv). Last year was the first one, and I went alone. Then Yariv asked us at TLD to design and code the new website for UdayaLive, which launched earlier this year 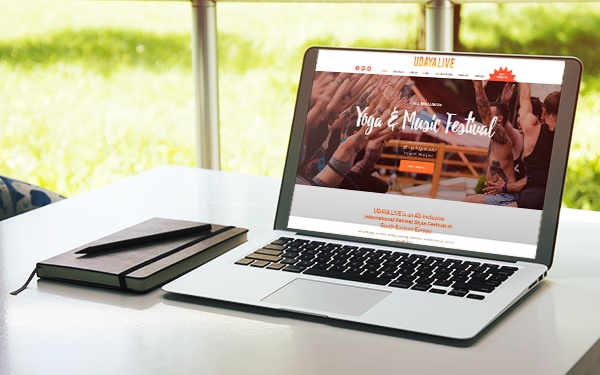 At the 5 day festival, In addition to yoga from the best teachers in the world, there are live musicians. So, each class we went to we would also have a musician playing, which hugely enhances the experience. For example, the first class I went to, I went because the amazing Anita Coats was playing – accompanied by her guitarist Scott Cambridge. Luckily, the teacher, Andrea Marcum, had a perfect teaching type to ease me back into yoga.
Check out this video taken by one of the attendees and posted on Instagram of one of the classes on one of the stages.

And this image taken by my cousin Gabby’s husband, Tom:

The water stage at #UdayaLive yoga festival in Bulgaria – where 4 of the TLD team (Elisa, Keren, Tamlyn and Charlotte) are for a few days!

On average I did 2 classes a day there, though some of the hardcore yogis did 5 or more! I definitely have a favourite yoga teacher, Rudy Mettia, and my favourite musicians are Anita Coats, “The Other Deepak”and we also had an amazing surprise – Idan Reichel did a concert at lunchtime on the Friday (which was my birthday). Each evening there was a concert where there was a headline musician supported by others. Steve Connell, spoken word poetry master, also did a couple of sets. The most impressive thing is how often a musician would be accompanied by others who would just pick up on what was being sung/played and work in their own magic. A lot of the music was like this – and that takes immense talent. The Other Deepak and his band the Breath of Life Tribe held a fantastic concert on the UdayaLive Water Stage, and he had Steve Connell come up and do a rap. He also played a song from Robot Nature, his other band. So much talent, that Deepak!

Tamlyn and Keren with Yariv Lerner in the middle – the man behind and at the forefront of #UdayaLive – and @kerenlerner’s big brother! . . #family #yoga #TLDteamlove

Once the festival was over and the yogis, musicians, members of my family and new friends had gone home, the TLD team headed to Sofia for three days where we worked in the offices of the Studio. And there was an impromptu concert with Anita Coats singing and Steve Connell.

Proof we were working when in Bulgaria!