Here is the second edition about how movies can use social media platforms. In this post, I will review Twitter profile of classical drama Forrest Gump. Activity and variety are two main factors I will review.
Twitter profiles of movies are usually active up to about a year after a film’s release. And some are never really properly active at all even if they have set up the profile.

Lieutenant Dan, I got you some ice cream.

I ran and ran just like Jenny told me to.

This comparative lack of Twitter activity in the film business suggests that Twitter is not being considered as a powerful communication tool for film brands – which makes sense, as it’s more natural to tweet as yourself.
But interestingly, drama Forrest Gump with Tom Hanks first saw the light in 1994, and you can find its Twitter profile, @FourestGump, active since its joining in January 2013.
The movie itself is full of quotes – funny, sad, bright or silly, and unforgettable. The same fact you can observe while reading tweets: all about quotes and memories. People on Twitter will see them, retweet or favourite and the success of the movie keeps it going.

Frequency: Quotes from the film are tweeted around 3 times a day. The community manager of this profile doesn’t upload pictures – but retweets images uploaded by others which have some relation to the film – examples below.
Scheduling and Automation: While this profile must be making use of scheduling over the last few years, it’s not clear what tool is used – Hootsuite might be it, as they could have uploaded a spreadsheet of quotes, and setup an automatic retweeting feature for any quotes that are also from the move.
Retweets, not engagement: From time-to-time quotes of others are retweeted, what is great link with followers. The link isn’t always an obvious one. But, imagine the feeling when Forrest Gump with 160K fans retweet your picture or line. You will feel amazing and appreciated. 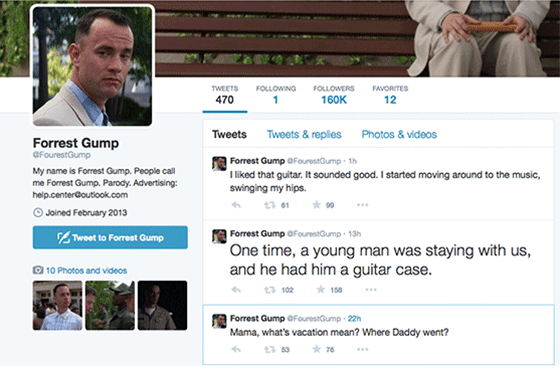 The banner is a good image which fits into the banner shape well. Only 10 original photos or videos are uploaded, and others that show up are retweeted.
Very low variety: However, the variety of posts is not huge, mostly lines and quotes from the movie, and some retweeted pictures. There are no videos since November 2014 there were not uploaded any videos.
What’s missing:
In terms of own content they could be posting:

With respect to this classic, it may be all that followers want – to recall the cute, naive but honest character of Forrest – but I think it could be a lot more interesting and engaging if the above were introduced. It wouldn’t need to take a lot of time, but definitely some effort would be needed compared to what looks to me like complete automation right now.
Is it worth it?
We know
Saying that, I don’t see the specific reasons why some posts are retweeted, it seems a little bit random – if you see something that can help me explain their logic then please let me know in the comments section below this post!