On the 28th of September, 2012, JP and I (pictured below) went to spend a day learning new skills and trends at The Designer’s Fiesta – a “celebration of design and digital”, brought to London by the UK’s leading Adobe Authorised Training Centre – Academy Class. We went check out the latest trends in design and development and to hone our skills. Keren asked us to blog about it, and thought interview style would be the way to go. Read her Qs and our As below! 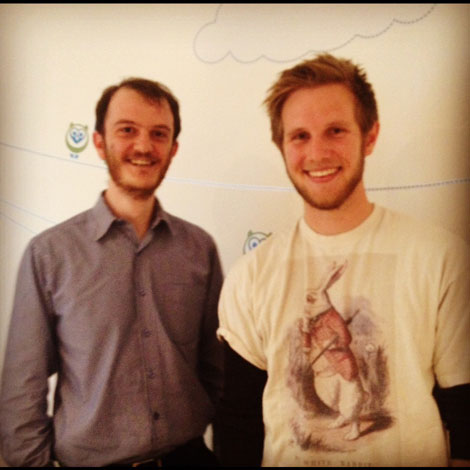 What was the event you went to?

JP: We went to Designer’s Fiesta 3

Who was it aimed at?

JP: It was aimed at web designers and developers looking to learn something new and expand their skillset.

Chris: The Designer’s Fiesta was aimed at designers and developers to share tips and tricks from some of London’s top creatives.

Who ran the event?

JP: The event was run by Academy Class, a training centre for web developers and designers.

Was it well attended?

JP: Yes very well attended, all the rooms were full. At some of the talks people were sitting on the floors because they ran out of space.

Chris: The event was well attended with maybe around 150 people – a lot of bum’s on seats and even a few on the floor.

Did you meet any new people? Who?

JP: There were loads of speakers there, from designers, typographers, mobile developers and industry experts.

Chris: The speakers were well prepared for hour long talks reviewing new tools and actions in Adobe Creative Suite and answering questions from the crowd.

JP: The speakers were really well prepared, well most of them. They gave good presentations and kept their talks interesting. My favourite speakers of the day had to be Leon Baird and Andrew Dobson. Leon’s talk on mobile development sparked an all new interest on mobile app development, and even got me think what it would be like to develop and use a Mac.

Who was the best speaker?

JP: While I really enjoyed Leon’s talk on mobile development I have to say my favourite talker was Andrew Dobson. He gave a really good talk about the industry and how it’s been developing over the years. He spoke with over 15 years experience and has been in the industry when there wasn’t standards and the job description was just figuring stuff out. He also spoke about how designers and developers should work more closely together and not as separate work stations.

Chris: The speaker who stood out for me would have to be Tony Harmer, his extensive knowledge of Adobe Creative Suite was incredible. From his knowledge of Adobe CS6 he utilises and manipulates elements over all Adobe programs to create exciting and interesting design.

What did they talk about?

JP: Most of the talks that I attended were about mobile development and responsive design. While a lot of the focus was introducing you to the basics and the concept behind the technology and what we should do to move forward in this exciting merging market.

Chris: The majority of the Designers Fiesta talks were based around the Adobe Creative Suite CS6 introducing new tools that have been added. Each presentation was funnelled into specific areas for hour long talks about : Sexy Texty – Typography, Illustrator colour tools, CSS for Photoshop fans and loads more interesting talks.

What did you learn?

JP: My answer below hopefully answers this question.

Chris: As a fan of Illustrator I found the colour tools talk by Tony Harmer very informing he spoke about colour pallets how to manipulate colour harmonies and apply them to designs. Also his talk on Adobe Bridge was very good.

What will you do now differently?

In Leon’s talk he spoke about when he worked at huge corporate company’s developers and designers were told to sit in the corner when they broke something. But when at agency’s or app/development company’s you got a pat on the shoulder. You see when you do something you know how to do the chances are you will succeed and everything will work perfectly. But when you do something you don’t know, or experiment with a new method of coding you’re bound to break something and by doing so you have to fix it and learn. In short if you’re not breaking anything you’re not learning.

What are you itching to try now that you learned about it?

JP: Oooo I am itching to try and make an app, it’s completely different to what I am used to developing but I am sure I can learn.

Chris: I really want to have a go at using bridge to utilise its tools to speed up the ‘in-between’ time between changing through programs, designing and searching for files.
Bridge provides a platform where you can organize files and create categories for speeding up design time and making the most of your time.

Would you recommend this event to others?

Chris: Yes I think the event was well worth going to, they had some very knowledgeable speakers and some good information to share.