Summer is officially over and the TLD team have been up to all kinds of outdoor shenanigans in 2010. We’ve jumped off 30 foot cliffs in Wales with the young people at Our Say Our Way and hugged trees at Go Ape. Our latest team building experience included a trip to Brighton for a bit more water action and quad biking. Want to hear more? Well here you go!

Things stated off peachy, Keren, Tamlyn and Michael came by car with Anders (Keren’s hubbie) at the wheel and our good friend, Chris taking my seat in the car (No, don’t worry I wasn’t abandoned, forgot about or anything like that, it was just quicker for me to take the train!).

My train journey was pretty calm, collective and peaceful. The car journey was slightly more, shall we say “energetic” with rock music, Radio 1 on loud and a few strong words when they got stuck in traffic jams. To top it off though, and I only found out once we had all arrived, that the directions to the hotel that I had carefully planned in the itinerary were all wrong! Haha! Never mind, we all make mistakes!

After we’d unpacked and been fed and watered, we headed along to our first activity of the weekend, paddle boarding at Hove Lagoon. As we walked down the long promenade we were all looking out to sea to try catch a glimpse of this idyllic blue lagoon we were hoping for. Turns out that Hove Lagoon is more of a large outdoor lido, around a meter in depth and full of very salty water indeed.

After we had shimmied into our wetsuits it was time to grab a kayak and get paddling. We split down into two teams (girls v boys) and played British Bull Dog water style and team relays. Feeling quite exhausted from all the splashing around, we then had a go at “stand up paddle boarding”.

For those who don’t know, stand up paddle boarding consists of a 12 foot board and one long paddle. The aim is to start on your knees until you are confident enough to stand and paddle. We all managed to stand and before long we were paddling the length of the lagoon with the wind behind us.

To finish the session off we had a bit of fun and spit into 2 teams again and had a race to build a raft, get it in the water and round a buoy in the middle of the lagoon. The boys took a more tactical approach using nearly every piece of equipment to hand while we, the girls took a more hosh bosh approach using lots and lots of rope to thrash our raft together.

The test was to carry the rafts to the edge of the lagoon and hop on. We (the gals) managed this successfully but alas the boys raft disintegrated underneath them and Michael and Anders were left floating on their backs with their feet in the air.

After the water activities we went back to the hotel for a quick shower and headed to Brighton for a meal and then some shape shifting on the dance floor at Ink Bar. That’s as far as I will go here as I wouldn’t want to embarrass anyone! 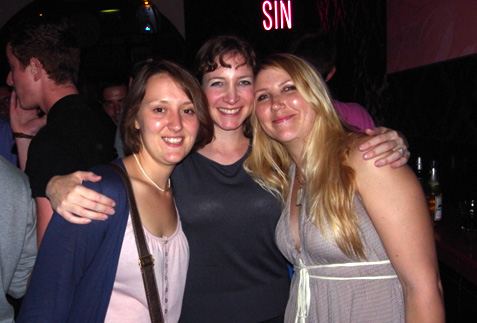 Sunday started early with a full cooked breakfast, tea and toast. We then all headed to the car/taxi for our 15mins (by my itinerary) journey to the quad bike centre. 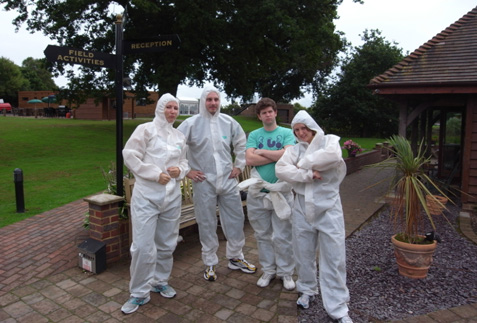 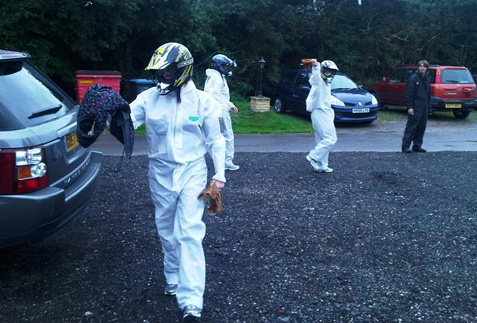 We were the first group to go out in our white overalls and smelly helmets. We got shown the basics of quad biking and then we were off. The gals took the larger quads and the lads had the smaller ones. Apparently the small ones went faster, however – Tamlyn was flying on hers!

We started off easy, going round in a figure of 8 in crocodile formation. Then we went cross country, up some manmade ramps and though some woodlands. It was at this point that our first accident of the whole 2 days nearly occurred when Keren managed to wedge herself on a bank while going down a rather steep hill. Luckily she managed to stall the quad and hop off the bike stopping it from bumping into the back of me. Pheww! 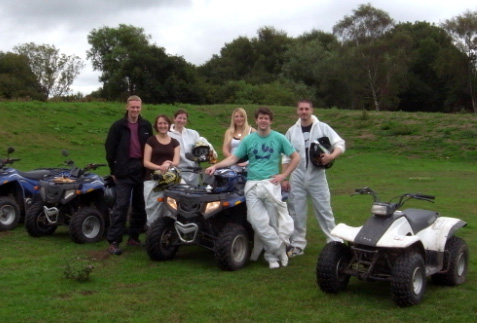 Anyways after all the high speed quad biking we thought we deserved a nice lunch back in Brighton before heading back home.

All in all the weekend was a hit and we had some proper time away from the office to bond and do things we have never done before! Hopefully there will be more fun times ahead of us next spring summer to look forward to. Watch this space!