As fans of cake, we started to notice a lot of resourceful cake makers who have created beautiful cakes and cupcakes to celebrate the Royal Wedding. And then, upon further investigation, we realised it’s not just about cake (who knew?).

Below are some examples: 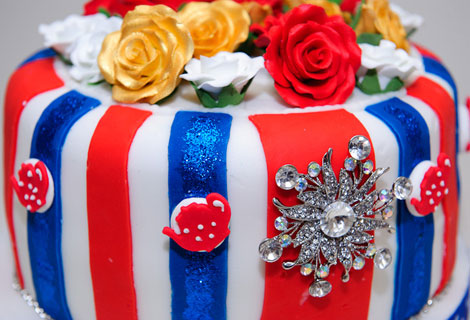 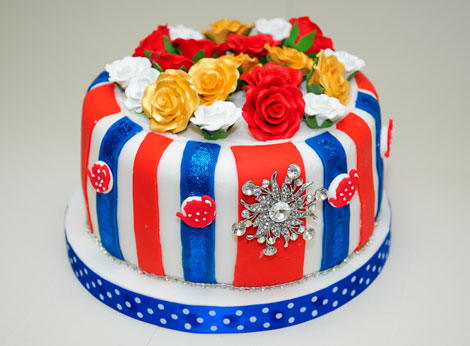 We asked Lara to tell us a bit more about it – she said:

“With this cake, I wanted to create a fun, over the top, quintessentially British royal wedding street party look about the design, that would incorporate the public as well as the royal couple themselves. So the sponge used is the most famous, and royal, of English cakes, the Victoria sponge with lots of strawberry jam, and the design itself uses a whole range of motifs – the union jack, House of Windsor roses, diamante strings and brooches, and teapots of course – as the cake would ideally be for a street party! Blue and white polka dots lining the cake board I thought would be nice, referencing Kate Middleton’s classic sense of style.” 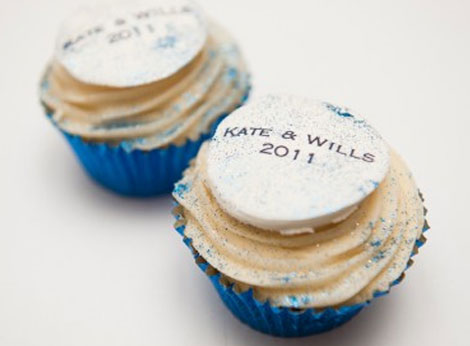 We recently discovered the Cherry Blossom Bakery via a Twitter introduction – another innovated example of creativity mixed with royal nuptual celebration!

“Cupcakes are ideal if you’re having a Royal Wedding party – choosing lots of different, exciting flavours make them a real winner, especially with children! For this design, the icing cushion makes a perfect base for the classic jewelled crowns – very regal! With the cake, I wanted to make a bold, British statement. The hand-piped Union Jack is simple, yet striking, designed to make a patriotic centrepiece for the centre of any party table. One customer suggested that all the individual dots could represent individuals in our community coming together to celebrate the Royal Wedding; Not my original intention but a lovely thought!” 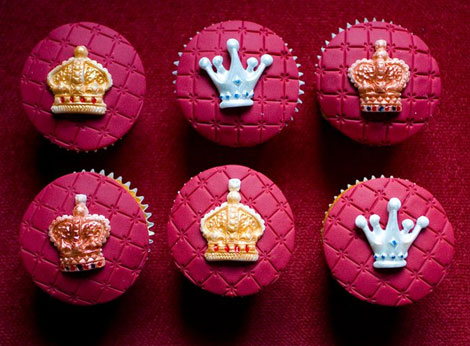 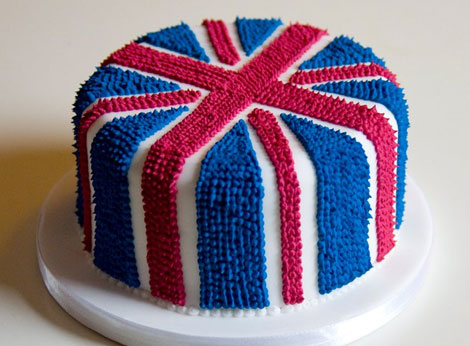 You may or may not have heard about this – it’s a giant card that you can sign – via Facebook – to thank Kate and Will for giving us all an extra day off. You can check out their Facebook page (you need to be logged into Facebook to see the page) – be sure to like them -and see more about this there. Below is a picture, taken out of a window by a friend of ours, Regina, of the ACTUAL CARD. What a scoop! 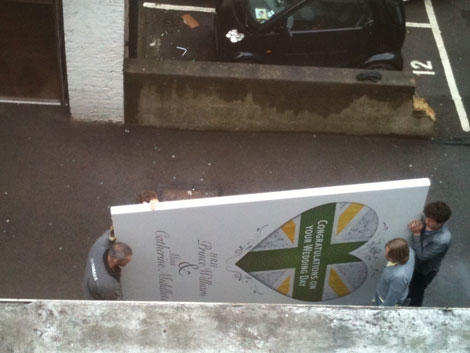 These limited edition Pez dispensors are on auction on Ebay – the proceeds are to be donated to the Starlight Children’s Foundation. 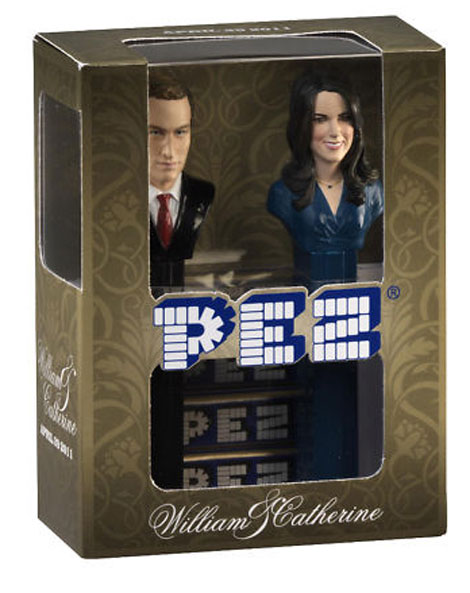 Knit your own Royal Wedding

This is a book I spotted at Selfridges which really impressed me. The time it must have taken to put together is MUCH longer than baking cakes (sorry cake makers!). I felt it totally deserves a mention!

Another example of resourcefulness – the guys at Legoland have taken it upon themselves to build a Royal Wedding tribute for the big day at the end of April. It’s quite amazing and you can read about it here on this article – Legoland downsizes Kate Middleton and Prince William’s big day 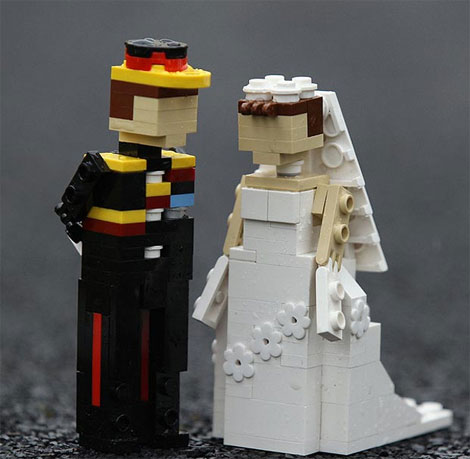 Here is a picture of the royal couple made out of many many stamps. You can’t really get more British than that. It was created by artist Peter R. Mason – see some more of his work here.

I asked Pete for a soundbite and he said “I suppose like many others in the country at the moment I feel that a ‘special’ event could improve the mood of this countries people. A royal wedding is such an event and this one has a dream/fantasy quality about it having such young, happy and inspiring people involved. Also looking towards the future there is more than a possibility of William becoming King with his bride to be then becoming Queen Catherine. To juxta pose this I would then be able to create a new portrait of the then Queen using the stamps of what would be King William. I hope they’ll be happy with their special wedding held in Westminster Abbey – hence my including the Rose window in the background of the portrait.” 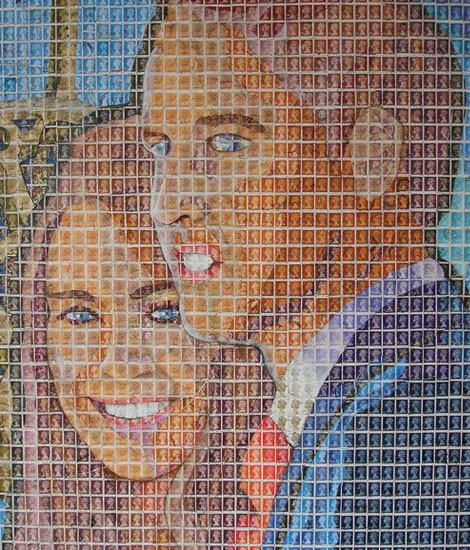 This is a really useful usage of momento from talented illustrator, Luke James – something anyone can buy and not feel guilty for wasting money. He has also done a couple of other editions – they are 100% cotton and hand silk screened – you can even buy one here! 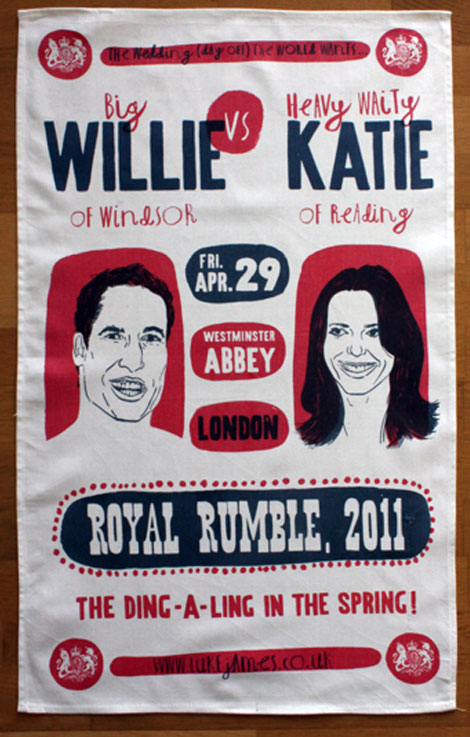 Castle Rock Brewery has brewed a special real ale just to celebrate the Royal wedding – it’s been rather well received if you look at their website and read more about it. 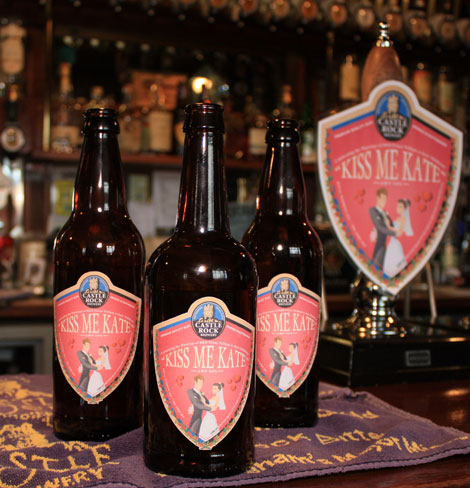