This is super exciting. I have had the chance to interview and feature someone I have been a fan of for quite sometime – someone clever, creative, talented, and funny. And who I haven’t met in person (yet).
A bit of background: I walk by The Breakfast Club quite often on the way to work and I often take pictures of the signs (“A Boards”) outside and post them on Instagram – because they are funny and creative. See below for some of the boards I took pictures of: 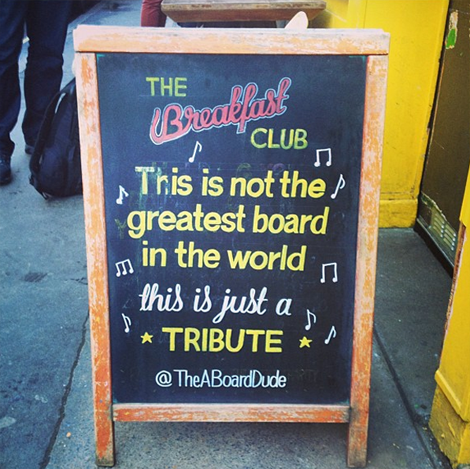 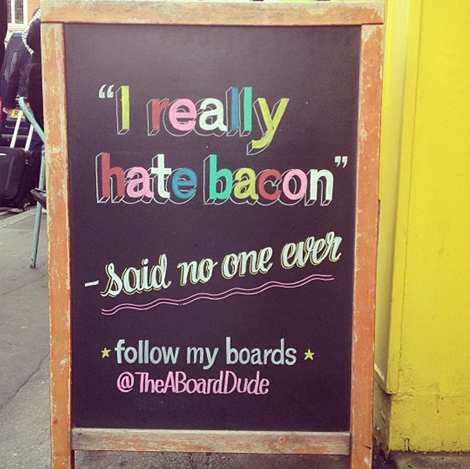 I noticed the Twitter name of the guy who puts them up – @TheABoardDude – and said to myself, “I need to interview this guy”
So, I contacted him on Twitter, showed him my Instagram feed (to prove I am a fan) and asked if I could interview him (I would email him questions and he would email me back the answers). I knew he was a smart guy, and it was further proven by his answer:

@topleftdesign I'd be happy to answer any questions you throw at me. Shall I just message you my email address?

My Q+A interview with Joshua Harris – “The A Board Dude”

How did this whole A Board thing start?

I started working part time for the Breakfast Club in November 2011 while I was still a student. It wasn’t until about 6 months ago that I offered to design an A Board at the Angel branch in Islington, after getting a bit of inspiration for a play on words. Roughly a week past and I heard from my manager that my boss, Jonathan Arana-Mortan had seen and loved what I had done with the board. Before I knew it I was offered the job of chief illustrator of all of the boards at each of the Breakfast Club branches. From September till now I’ve been designing the boards every week at all four locations. All my work is on my Twitter, which I started as a result of this.
Below is an image of the first board I did. 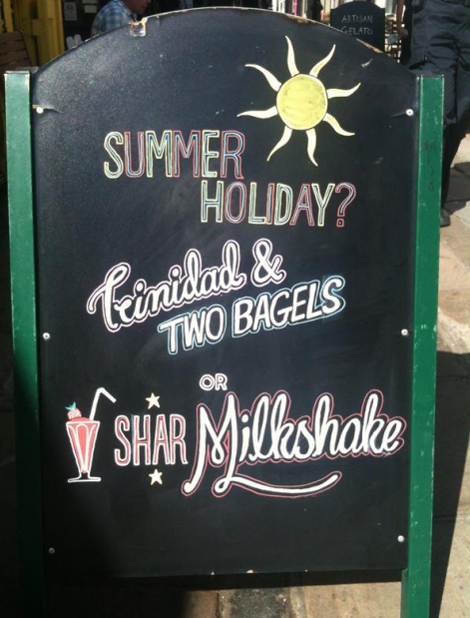 It was the summer of 2012 that I graduated from Camberwell after studying for a FdA in Graphic Design – a two year course which offers the opportunity to top-up with a BA Honours. I decided to take a year out to pursue my personal hobby hand-rendering typography and illustration, as well as to get used to working full time in London. After graduating I became a full-time waiter at the Breakfast Club, the money I earn there is what I use to get by. Ideally, I would like to continue practicing my craft whilst building up a decent following on Twitter and Instagram, so that I may eventually move on to bigger and better gigs around London. Seeing as it was only 5 months ago I started this work with the BC, I’m happy with the progression I’ve made so far!

If I know a restaurant owner, can I recommend you? What do you charge for other restaurants and venues?

Yes of course. I’m really keen to work on other projects separate from the BC. I would especially like to illustrate typography on windows and walls of shops, restaurants or cafes – whether it’s to advertise merchandise, food, or just to make jokes. My going rate is £20 per hour.

I noticed that some of the boards have more words and detail, – do you vary your prices because they must take you longer?

In order to deal with the problem of taking longer on certain projects I decided to have a set price for hourly work. Some boards do take considerably longer, especially when advertising an event with a lot of information about it. However, due to the content of the work at the Breakfast Club, I generally spend more time thinking up puns or jokes that suit the ethos there.

Do you do all your own writing? Do you take requests?

Most of the writing I do is mine. I tend to find old, and familiar jokes to use, or I modify and/or add other words to create new content. Recently I’ve been asked to look at more topical work – such that is in the media and is very current. But I can’t help but throw in a cheesy play on words sometimes. I have taken requests, a girl by the name of Harriet Alders on twitter asked me to put her joke on one of the boards one week. 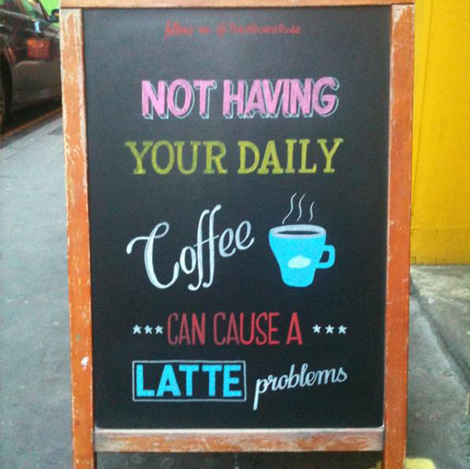 Where do you see yourself in 5 years?

Ideally, working in my own studio, producing work similar to that of Dana Tanamachi, and Jon Contino, two big inspirations of mine. I’d like to dive into some internships/apprenticeships over the next few years and perfect my craft. Then eventually move overseas and expand my work to new cities and travel.

What type of work do you want more of?

Wall art and window displays. Work for pop-up restaurants/cafes at music festivals, designing their food/drink boards, stationary or posters. I went along with The Breakfast Club festival team this summer just gone to work at Camp Besitval in Dorset. There I designed all the signage for the food and drinks.
Basically anything that can involve hand-rendered typographic design work. I’m happy with what I’m doing at the moment, but am more than willing to explore new areas of design.

Here are some more of Joshua’s A boards: 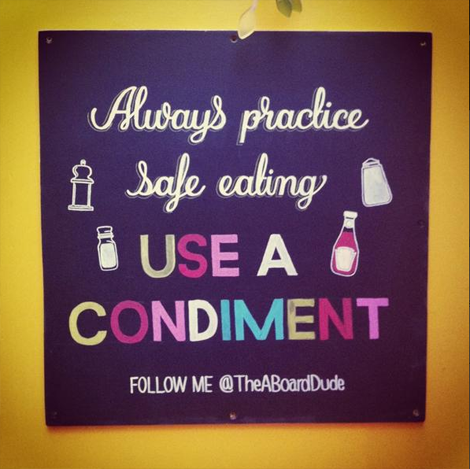 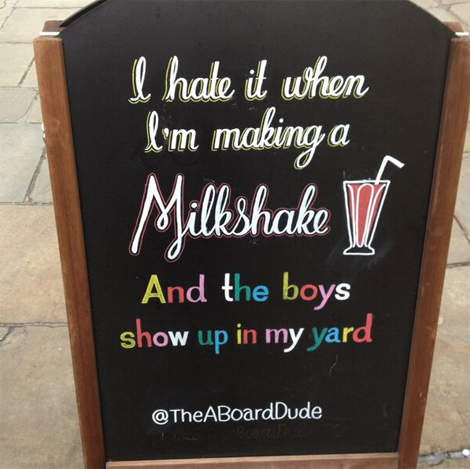 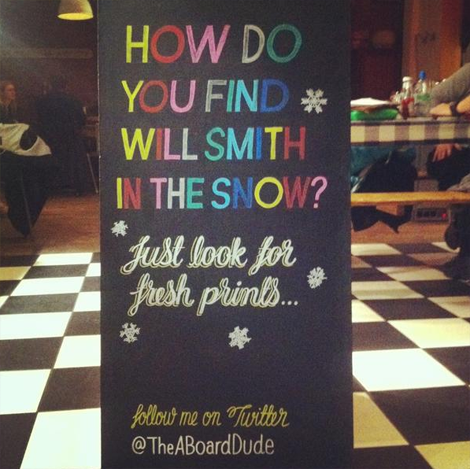 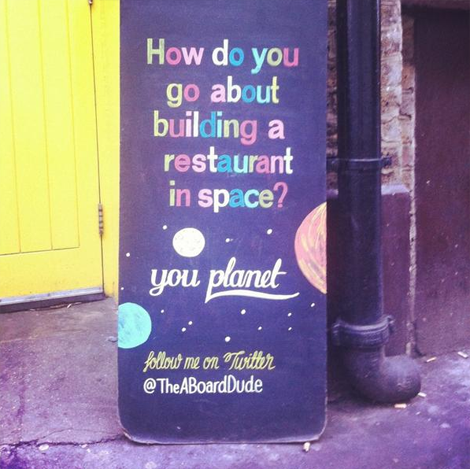